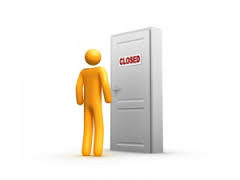 1.  They aren’t prepared to take a chance and a risk.

3. They aren’t prepared to start small.

4. They aren’t prepared to start in a ministry with someone else’s name on the door.

5. They aren’t prepared to help people for free 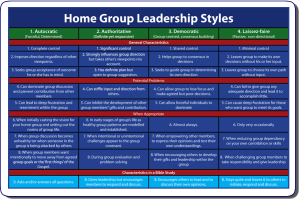 Your home group leaders will have different styles due to their differing backgrounds, ages, styles and personalities. That’s not a problem. What is a problem is when they don’t know when a slightly different approach is necessary. This chart shows the differing styles and when they are important. It should help any small group leader consider their style. Remember – anything done on purpose is better!

Just being a pastor, or being the boss does not make you a leader.  Being a leader simply means having followers – now that doesn’t mean you are the next Jim Jones and people follow you blindly – it is much more mundane, but also much more amazing than that.  Being a leader simply means you influence people on purpose.  We all influence people – we make people think and act in certain ways that they wouldn’t if we weren’t about.  For some people that influence is accidental, we are moody and grumpy and go to work and make the whole place moody and grumpy.  We are offended at an elder in the church, so we go to church and gossip and affect the behaviour of the church and corrupt the place.

But leaders – and everyone is called to be a leader – influence people for the better.  They reckon the shyest person on planet earth still will influence over 10,000 people in his lifetime, and the average person influences a dozen people a day.  You influence your children, your friends, everyone.  Leadership is just becoming better at influencing people.  So let’s find out about leadership and how to climb the three rungs of leadership.

The first rung is called RELATE.  You have to get to know people.  You have to build relationships, you have to find out about people. There’s an old saying: people don’t care how much you know until they know how much you care, and it is true.  You need to care about people.  If you relate to people, they will love you!  People are lonely in this world, and we are not designed to be alone.  If you are the boss, go for a walk around the office and ask how people are doing, find out how their children are doing, find out what they enjoy, what they like doing outside the office.  Go and make some friends – let people know you care.  That’s the first rung and if you get it right, people will like you!  If you are unable to build healthy relationships, you will never be able to lead long-term – that’s a fact!  To be great at this rung, have a genuine love for people.  Care about the success of the people you work with.  Make sure people are more important than procedures.

The second rung is called RESULTS.  You have to be someone people can respect to get the job done.  If you are the manager at work, get your department making some money!  If you are the pastor, get the church doing something God honouring that attracts new people to the service.  On the first rung (RELATE), you get together because you get together.  But good leadership then takes the next step to RESULTS and gets together for a purpose.  You need to become results-orientated to become a good leader.  In certain fields (football and sales, for example) it’s obvious what makes a good result.  In other fields (church life for example!) you need to also clarify what a good result is and celebrate it.  For example in our church, we are about making disciples who dream big. So when one of our guys met a couple in the car park who were going to a miracle service and prayed for them and got them healed before they ever got to the miracle service, we celebrate and tell that story because we are celebrating the win.  When people get born again, or we have record attendance, or new people get released into leadership, we clarify to people: look a win.  That helps them know you are getting results.  At this rung, people respect you.

To do well at this rung, do things that cause growth – use some initiative.  Have a dream, scheme and theme for your business, church, organization.  Develop a system of accountability for results – including your own!

The third and final rung is called REPRODUCE.  This is when you start to succeed as a leader – a great leader isn’t great because he is great, he is great because the people he leads are consistently great.  You invest yourselves in the life of others and you reproduce success and life in them.  People come to your church and they have no or little social skills, and you bear with them and help them develop social skills.  That is reproduction.  You are a great preacher and you break down the process of preaching so that some around you become great preachers.  That is reproduction.  If you step onto this top rung, people will be loyal to you naturally because they know they owe you part of their life because you poured it into them.  At this stage you become a leader of leaders and are now helping others climb these three rungs to leadership.  As you do, never forget the lessons from the first two stages: don’t suddenly become aloof and let success insulate you from the people who you should be relating too.  Spend some time reading the annual reviews of your entire team.  Read all the connection cards yourself, and email a personal response to everyone.

To be valuable on this final rung, realize that people genuinely are your most important asset.  When I started church planting I thought money would be the scarest commodity – but it’s not, it’s good people.  Be a model for others, help your key leaders grow and surround yourself with an inner core of people that complement your giftings and who love leadership and love your dream.

Remember to still get results, but now you get results as a team, not just as a one-man band.  The higher you climb this little three runged ladder of leadership, the easier it is to lead.  The greater the growth of your business, church, department.  But never leave the RELATE step behind!

Now if you are leading a group, you may not be on the same rung with everyone, and that’s fine, but take the time to climb up! Become a better leader!  And for your leadership to be truly effective you must take people up to the third rung with you and show them how to get RESULTS and REPRODUCE.–

Pastors should be giving birth to pastors!  That means two things: firstly, you should be raising up people in the church who end up being pastors – they are appointed in the body of Christ by Jesus to be part of the pastor ministry as outlined in Ephesians 4.  That’s why good pastors don’t just pastor, they are always looking at planting churches because they are raising up pastors!

The idea that the pastor is a lone wolf who does everything couldn’t be further from the Biblical model.  I believe it has been adopted because a lot of pastors in ministry today have never been called by God to be pastors, are not able to bear pastoral-fruit because they are not a pastoral-tree in the first place!  But those who are called by Christ to be pastors should easily bear fruit and that fruit should be pastoral fruit.

Now this process of raising up pastors and leaders within the church is a three step process:

Secondly, as you go, identify those around you who are called.  This process can be very supernatural, or very natural.  Sometimes God will be very specific and clear about who is to be your assistant pastor, your community pastor, etc.  Other times it is like Acts 15 “it seemed right to the Holy Spirit and us” – the person is just the right fit, and you don’t need a voice from heaven to know that person is part of your church.

When identifying people, don’t just look for gifts.  Gifts are not enough.  A qualified person for you to raise up must have the following three qualities: they must have a gifting, they must have character, and they must have your culture.  Some people are really gifted but have no character – they will destroy your church.  Destroy it.  Do not raise up people who are not focussed on improving and developing their character.  Don’t appoint greedy people, people who are selfishly ambitious or people who cannot relate to the opposite sex with respect and purity.  That will kill your church.  Other people are gifted and have character but don’t get your culture – people like that – even with the best intentions – will split your church.  It’s slightly better than getting destroyed, but it’s still painful.

Your culture might be really into small groups – if so, don’t raise up people who don’t get small groups.  If your culture is multi-ethnic, watch people relate to those from all sorts of backgrounds before appointing.

Then the final stage is to release.  This is not a once and for all – it’s about steps.  As the church grows, your responsibilities and task will grow, and other people’s jobs will grow.  So you need to release people step by step.  Get them to receive an offering before you ask them to preach.  Get them to put out chairs before they receive an offering.  If they are too big for putting out chairs, there is a massive clue there! If they can’t usher but only want the upfront job, or the job with prestige, you know something!

But those people who are willing to work, release.  Some pastors hold tightly to everything – and I get it – you should be a control freak – you have built that church with God’s grace and your blood, sweat and tears, and you should not let someone who has invested a lot less, and will be fine if the church falls apart, turn the church into their personal ministry pool.  That’s all true.  But you can stay in control of the vision, but release control of the elements of the church and raise up others.  Others who will do things differently, others who may betray you and may stab you in the back.  Jesus knew Judas would betray him, but he still delegated and released the twelve.  I found over time that Jesus’ ratio of 12 apostles:1 money hungry, power crazed, ego driven, back stabbing Judas is about right.  People will hurt you, but others will help you.  And the help outweighs the hurt, and the world is too large for another one-man band church – so you must look beyond your insecurities and hurt and release people into ministry.