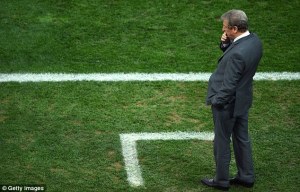 3. You have to put energy and experience into defence.  The natural attitude of a leader is to advance, to take ground and to win.  But while we are called to be pioneers and move forward, you have to also ensure that no one is going to advance on you.  England did not have defenders that were able to play at international level and keep the other teams away from their net.  As a leader, always make sure that the people you have in place are able to do their jobs.  David had a mighty man whose only job was to defend a lentil field.  That seems a bit mundane, but if you are going to win a war you need lentils.  If you are going to win a football match, you have to defend your goal.  If you are going to lead a team think carefully about your assets, your direction and your plans and work out what needs defended (it might be unity, it might be a culture, it might be a structure or USP) and make sure it is defended by your best people.

1. A team needs a leader, not just a coach.  A coach can encourage individual players and get the best out of them, but let’s face it England has better players than any of the teams it lost to.  It needed a leader to show them how to work as a team, to work them in the right places and ensure that people fit together.  Most people do not know how to find their place and do not know what they do best and where their strengths and weaknesses are.  You need leadership who can be honest with you, who care about building a team that works, rather than exalting individuals.  A coach is great for building a person or a group of persons – but a leader builds a team.